Other Limitations
Funds awarded under the HBCU Programs must be used to Supplement and to extent practical, increase funds that would otherwise be made available for the purpose listed in 608.10 and 609 of the program regulations and in no case Supplant those funds.

Supplement is defined as using grant funds to correct a deficiency in an existing activity or service, or to improve, enrich, or enhance an existing service or activity through the addition of new services or activities.

Supplant is defined as substituting grant funds to pay for personnel, activities, services, or other cost thatwere supported from other sources prior to the receipt of a grant or such costs that are contained in the current institutional budget.

A grantee shall not use more than fifty percent of its grant for constructing or maintaining a classroom, laboratory or other instructional facility.

In 1973, President Calvin Rock sent Dr. Timothy McDonald and the Development Officer Dr. Rick McKinney to a Technical Assistance Workshop at Alabama A&M University in Normal, Alabama. Dr. Audrey Dickerson one of the founders of Title III in Washington, D.C., presented information to the HBCU Title III Directors and representatives regarding grant policies, procedures, and the application process for becoming a recipient of the award.  The program began in 1965.  However, Oakwood College had no knowledge of this funding until that day.

All HBCU’s could apply for funds to Strengthening Developing Institutions (SDIP) by completing the application, meeting all requirements and submitting the proposal before the deadline.  Drs. McDonald and McKinney came back fired up that evening and started discussing, praying, writing and developed The Quin C Center – The 5 C’s of Institutional Development:  Communication, Community, Curriculum, Coordination, and Culture.  They prayed over the proposal and mailed it off.  A few weeks later, the institution was awarded its first large Federal Grant Award of $100,000.  The monies were used for project funding staying compliant with the U.S. Dept. of Education.

Several directors followed Dr. Timothy McDonald and continued making strides with the assistance Title III Funds. Dr. Ellen Anderson became the director in 1978 and was followed by Dr. Rose Yates from 1981-1990, most of her achievements were academic driven to impact the following Departments: Business, Nursing, Physical Education, Family and Consumer Sciences, Institutional Research, and Inner College (DLRC, CSS).  Inner College was geared toward tutoring, academic advisement and personal social development. Their first tutor was Dr. Delbert Baker who returned in 1995-2010 as President of Oakwood College (University) and currently serves as the vice chancellor of Adventist University of Africa.

Hattie Mims retired and Ivy Starks became the Title III Director in 2008.  Title III continued to move the Institution into the 21st century with enhanced technology and fiber optic capabilities. Funds enabled development and implementation of campus closed circuit CATV channel for emergencies and public announcements, including the installation of 30 LCD televisions in academic buildings, library,
residential halls, and other public areas. Technology increased above and below ground making the campus totally wireless.  Inclusive of all funds (Title III HBCU, CCRAA/SAFRA) we were awarded $2.5M.

Ivy Starks was promoted to Assistant Executive Director for Development in 2013 and Michelle Ramey, the former Budget Analyst became the Title III Director.

The initial phase of the virtualization project began in 2015, the development of the virtual infrastructure prepared the foundation for utilization of the Cloud Computing through Microsoft Office 365 leveraging all the capabilities of a virtual environment. A Faculty Research Symposium was patterned after the National Institutes of Health Process for research administration designed to develop scholarly activities of the faculty. Also, Desire2Learn (D2L) an innovative learning management system was purchased for creating, hosting, and editing online learning resources.

During the fiscal year 2015-2016, the STEM departments were allocated funds from Title III SAFRA to improve the class and laboratory facilities.

Several faculty (including OU research students) within our department used the research equipment purchased on microbial- and molecular-based research projects including cancer biology and virulence regulation mechanisms in pathogens. These studies resulted in published abstracts and research presentations. Manuscripts are currently in preparation for submission for publication.

Improvement to the fume hood exhaust fans enabled the Chemistry Department to incorporate basic lab protocol that requires efficient fume hoods. Students and faculty now have a safe environment to perform experiments that require a hood.

Instruments were purchased to allow students to become familiar with and use modern equipment. The number of students enrolled in upper division labs have increased. With the new instruments graduates are more competitive candidates for graduate school.

Finally, the Passport system allows the department to keep track of chemicals and supplies, assist with inventory and quantities on hand thus minimizing running out of chemicals or supplies or purchasing unnecessary items.

The Department of Mathematics and Computer Sciences (MACS) purchased 33 thin client computers for the downstairs computer lab. This lab is used to instruct students who are enrolled in computer science courses. Prior to purchasing the thin clients, the lab did not have enough working or usable computers to accommodate class sizes; now the students have access to updated software necessary for accomplishing course objectives. All students enrolled in developmental mathematics courses can now complete their assignments using the required online portal, MyMathLab.

Funds were allocated to the Nursing, History, Allied Health and Communications departments for major renovations to facilities and upgrades in computer equipment and software for instructional labs and class rooms. 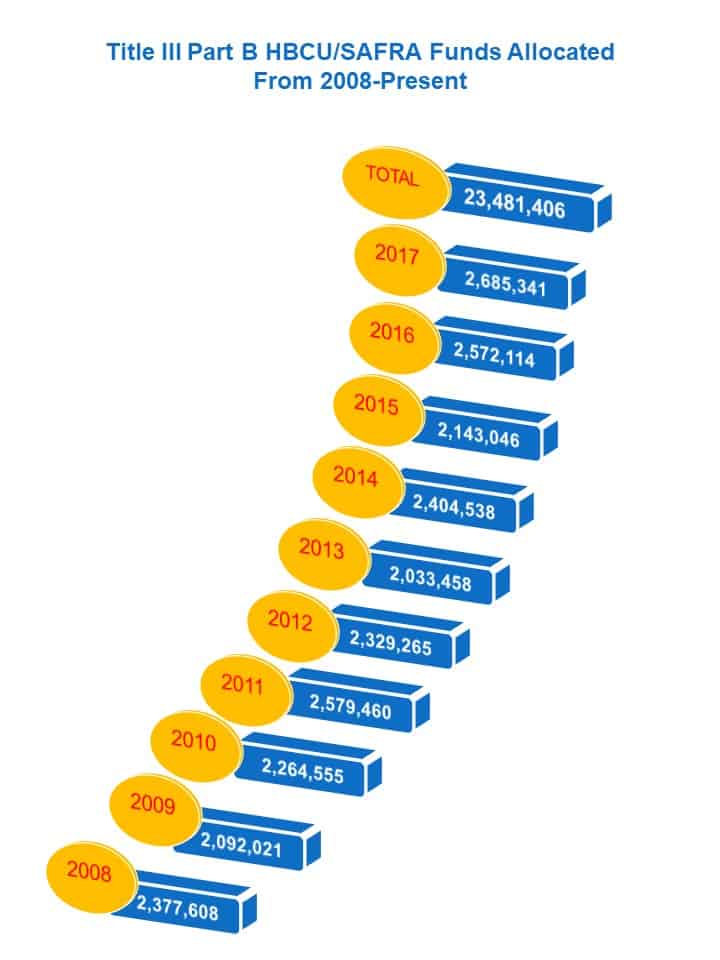